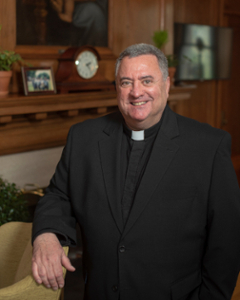 Prior to his tenure as provost and vice president for academic affairs, Father Marina held positions at Le Moyne as associate provost, interim chair of the education department and special assistant to the president.

Earlier in his career, Father Marina served as the dean of the School of Continuing Education at Providence College, assistant dean for the College of Science and Mathematics at Montclair State University, and assistant dean for Metropolitan College at St. John’s University. In addition, he taught religious studies at Providence College and mathematics at St. John’s University. He served as pastor of the Church of St. Francis Xavier and as associate pastor of the Church of St. Ignatius Loyola, both of which are in New York City.

Father Marina was recently a trustee at St. Joseph’s Hospital in Syracuse, New York, and serves currently on the board of Canisius High School in Buffalo, New York, where he is chair of the board’s governance committee. He previously served on the boards of St. Thomas Aquinas College, Regis University, Canisius College, Xavier High School and Le Moyne College.

His research interests include leadership and organizational change, and, in the area of theology, scripture and the question of non-belief. His presentations include “Inner-city Healthcare and Higher Education: A Partnership in Catholic Social Teaching,” “Graduate and Continuing Education in the Jesuit Tradition” and “Educational Delivery System Options: Programs to Attract and Retain and Educate Adult Students.

Father Marina entered the Society of Jesus in 2004 and was ordained to the priesthood in 2012.